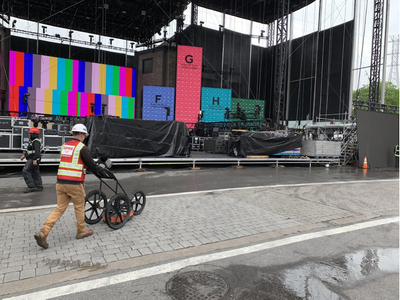 You may have watched the NFL draft from your home or favorite sports bar; hopefully you enjoyed it. It was quite a production throughout, but maybe even more amazing was the effort to set the stage for the event! There were thousands of crew members that helped to create the one of a kind stage and environment at the end of Broadway St. in downtown Nashville.

One of the crews that played a critical role in the success of the event was GPRS. GPRS was called to the project on a weekly basis to support operations by locating subsurface utilities throughout the work area and beyond. GPRS was utilized to provide utility locating prior to driving fence posts, tent anchors, support columns and placing temporary electrical, drainage and sewer lines. Throughout the weeks leading up to the NFL Draft event, GPRS located dozens of main utility lines including gas, electrical, water, sewer, storm and telecommunication. GPRS was also successful in locating a number of secondary and service lines. Having each of these utilities located ensured that the other personnel on site were safe from the potential dangers of hitting a subsurface line. Having critical utility lines located also ensured that the project stayed on schedule and helped the build stay on budget.

When GPRS was first called to provide pricing to cover this work, they were very professional and prompt in returning a competitive proposal. Obtaining GPRS’s COI and other supporting documents was very simple. With links right on their website, we were able to collect all the information we needed to establish them as an approved vendor and they were ready to start work almost immediately. This really helped to save time and money. Scheduling the work was as easy as calling the phone number listed for Nashville and setting up the time and place.

The format for locating utilities on this project was unique in that the areas that needed to be checked were at random locations. During some hours of the day, GPRS would be locating underground utilities on asphalt and concrete in the middle of the street and sidewalk. With a moment’s notice, GPRS would be needed on another portion of the project with completely different conditions. But, whether the locates were needed for a proposed fence line or right up next to the monster stage to drive anchor spikes, GPRS was able to cover almost any request.

In the pictures here, you can see GPRS Project Manager, Zach Vickers locating various utilities around the main stage prior to crews installing a barrier fence. With the amount of foot traffic and equipment in the area, one of the obstacles that Zach was faced with was creating a layout that was easy to read and would endure the traffic and weather for the days and weeks to come. Zach was sure to get enough marking paint on the ground, then worked with crew leaders to thoroughly explain his findings during a site walk at the end of each day.

This project was a lot of fun to construct for the NFL Draft and we were thankful to have a company like GPRS on our side to provide such a valuable utility locate service! 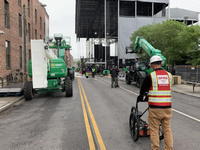